Steve & Sarah Roberts (Dwygyfylchi) wrote on August 1, 2017 at 10:49 am:
Gwynedd Garden Services turned up on time, both men were very polite and professional. They came to cut down some overgrown bushes in our back garden and trim some overgrown trees. We asked them to do some extra bits which they were more than happy to do, reasonably priced too. They did a fantastic job, we are so pleased with the way our garden looks now. You would not even know they had been, everything was cleared, even the driveway! Very impressed with the service we received, would most definitely use again and highly recommend to family and friends.
Mr Colin Lacey (Abergele) wrote on August 1, 2017 at 10:38 am:
This is a reference to the ground work recently undertaken at my home by Mr Dafydd Thomas and his team. Following other recent work carried out by Mr Thomas, I requested three large shrubs to be dug up from my front garden together with weeding and a general tidy, all of which was completed within a few hours. When completed, all excess material was completely cleared and swept away. Both Mr Thomas and his team continue to impress me with their professionalism throughout, including turning up on a Sunday!! The prices quoted were both reasonable and competitive for the work required. I therefore have no hesitation in recommending Mr Thomas and his team to anyone needing any gardening or fence work undertaken.
Valmai Davis (Dinorwig) wrote on July 6, 2017 at 9:50 pm:
Gwasanaeth ardderchog unwaith eto gan Dafydd a'i gyd weithiwr. Y gwaith wedi ei gwblhau i safon uchel. Yn amlwg mae'r ddau yn cymeryd pleser yn ei gwaith ac yn cwblhau'r gwaith ar dymuniad y cwsmar. Maent yn gweithion daclus ac yn ddi ffwdan. Maent bob amser yn barchus ac yn hynod o ddibynadwy. Edrych ymlaen i'w croesawun ol cyn y geaf. Diolch yn fawr hogia.
Hellen Lloyd Jones (Alaw Ward, Ysbyty Gwynedd) wrote on July 6, 2017 at 9:38 pm:
One day last week two young men arrived on Alaw ward early in the morning and introduced themselves and explained that they worked for Gwynedd Garden Services and that the owner Dafydd Thomas had sent them to come and tidy the internal courtyard garden on the ward. The garden had become over grown in the last few months and patients could no longer have full use of the garden. They worked very hard all morning cutting, trimming, sweeping, cutting down a tree and general gardening in the pouring rain. Both young men were well mannered and polite nothing was too much trouble. The patients have commented on how much more they can see in the garden now that it has been tided up and patients, relatives and members of the public can now access the garden when weather permitting. I would like to take this opportunity to thank both young men for their hard work that day and to Mr Dafydd Thomas for his very kind gesture. Thank you so much.
Glenys (Bangor) wrote on June 8, 2017 at 8:13 pm:
I would like to thank you, and your team for the excellent job you did on cutting down the large tree in my garden. Not only were you respectful of my garden, which is my pride and joy, you did exactly what I wanted. You cleaned everything up and you wouldn't know that you had been in my garden. Except for the missing tree of course!! The difference is amazing, there is so much more light not only in my garden but in my kitchen as well!! I will have no hesitation in recommending you and your team. Thank you again.
Chris Aubrey (Dwygyfylchi) wrote on June 8, 2017 at 8:01 pm:
Superb Workmanship,& fantastic new fence. Dafydd cleaned up as he went along, left the garden immaculate, better than before he started. A pleasure to have around, friendly, polite, considerate to neighbors. Couldn't fault anything even if I tried. Will definitely be the first person I call if I need any more work doing in my garden.
John a Nia Williams (Penrhyn Bay) wrote on June 1, 2017 at 8:03 pm:
Dafydd replaced a garden fence with concrete posts, gravel boards & new fence panels. We are delighted with the finished result. Dafydd and his team were friendly and courteous. They worked non stop, were efficient and very tidy, letting us know how they were progressing. No issues or problems and would definitely recommend them. 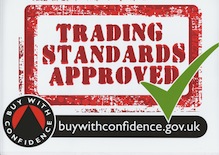